Galleries 29
Collections 1
Groups 0
Created 10-Oct-07
Modified 31-Jan-08
In 2007 the University of Gastronomic Sciences organised a giant expedition by bicycle along the whole course of the river Po with around 150 students. The inspiration came from Mario Soldati's research in the 1950s of the changes to the people, culture and environment along the river.

The voyage took more than 3 weeks, from the 26 September to the 20th October. I was the university's official bike-based photographer and some of the photos here were used in various newspaper and magazine articles. 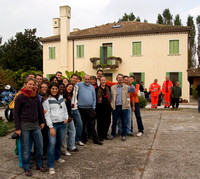